The Quinte region boasts hundreds of restaurants serving foods from all over the world.

There are several chain restaurants including Kelsey’s, Boston Pizza, Lone Star, McDonald’s and Burger King. Prince Edward County has been coined ‘the Gastronomic Capital of Ontario’ by the Globe and Mail with outstanding eateries including The Acoustic Grill, the Drake Devonshire and the Waring House. 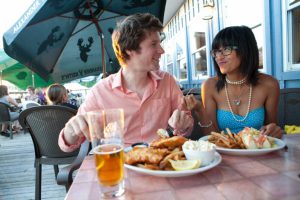 The County has over 35 winemakers which include Sandbanks, Rosehall Run and Norman Hardie that will allow you to pair a perfectly aged locally produced wine with your delicious meal.

Quinte West also has Thai, Sushi and Italian restaurants as well as the Trenton Delicatessen that specializes in imported Dutch and German foods and La Cultura Salumi bringing you the highest-quality artisan meats.

There are several grocery shopping options throughout the region including national food retailers like Metro, Food Basics, FreshCo and Independent Grocers.

Quinte Global Foods carries thousands of products from around the globe and will help you find the foods that you have previously eaten in your home country.